Glaucoma is a disease of the eye in which fluid pressure within the eye rises – if left untreated the patient may lose vision, and even become blind. The disease generally affects both eyes, although one may have more severe signs and symptoms than the other.

There is a small space in the front of the eye called the “anterior chamber”. Clear liquid flows in-and-out of the anterior chamber, this fluid nourishes and bathes nearby tissues. If a patient has glaucoma, the fluid does not drain properly – it drains too slowly – out of the eye. This leads to fluid build-up, and pressure inside the eye rises. Unless this pressure is brought down and controlled, the optic nerve and other parts of the eye may become damaged, leading to loss of vision.

There are two main types of glaucoma, open angle and closed angle (angle closure) glaucoma. The fluid in the eye flows through an area between the iris and cornea, where it escapes via the trabecular meshwork – “angle” refers to this area. The trabecular meshwork is made of sponky tissue lined by trabeculocytes. Fluid drains into s set of tubes, known as Schlemm’s canal, from which they flow into the blood system.

Primary Open Angle Glaucoma (chronic glaucoma) – progresses very slowly. The patient may not feel any symptoms; even slight loss of vision may go unnoticed. In this type of glaucoma, many people don’t get medical help until some permanent damage has already occurred.

Low-tension glaucoma – this is another form that experts do not fully understand. Even though eye pressure is normal, optic nerve damage still occurs. Perhaps the optic nerve is over-sensitive or there is atherosclerosis in the blood vessel that supplies the optic nerve.

Pigmentary glaucoma – this type generally develops during early or middle adulthood. Pigment granules, which arise from the back of the iris, are dispersed within the eye. If these granules build up in the trabecular meshwork, they can undermine the flow of fluids in the eye, leading to a rise in eye pressure. Running and some other sports can unsettle the granules, which get into the travecular meshwork.

Glaucoma has been called the silent thief of sight.

Primary glaucoma – this means we do not know what the cause was.

Secondary glaucoma – the condition has a known cause, such as atumor, diabetes, an advanced cataract, or inflammation. 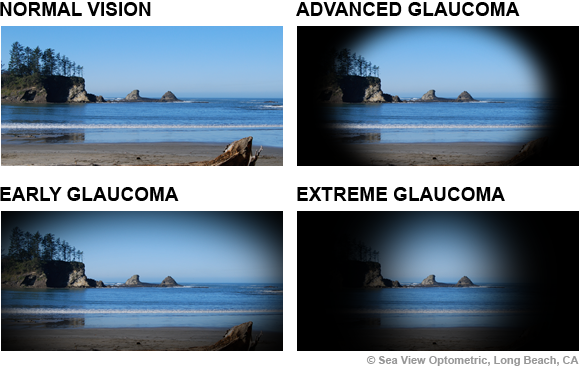 What are the signs and symptoms of glaucoma?

A symptom is something the sufferer experiences and describes, such as pain, while a sign is something others can identify, such as a rash or a swelling.

The signs and symptoms of primary open angle glaucoma and acute angle-closure glaucoma are quite different.

• In advanced stages, the patient has tunnel vision

• Eye pain is often accompanied by nausea, and sometimes vomiting

• Lights appear to have extra halo-like glows around them

What risk factors are linked to glaucoma?

• Old age – people over the age of 60 years have a higher risk of developing the disease. For African-Americans, the risk rises at a younger age.

• Ethnic background – East Asians, because of their shallower anterior chamber depth, have a higher risk of developing glaucoma compared to Caucasians. The risk for those of Inuit origin is considerably greater still. People of African-American descent are three to four times more likely to develop the disease compared to American whites. Females are three times as likely to develop glaucoma as males.

• Some illnesses and conditions – people with diabetes or hypothyroidism have a much higher chance of developing glaucoma.

• Eye injuries or conditions – some eye injuries, especially severe ones, are linked to a higher glaucoma risk. Retinal detachment, eye inflammations and eye tumors can also cause glaucoma to occur.

• Eye surgery – some patients who underwent eye surgery have a higher risk of glaucoma.

• Myopia – people with myopia (nearsightedness) have a higher risk of glaucoma.

Eye-pressure test – the doctor uses a tonometer, a device which measures intraocular pressure (pressure inside the eye). Some anesthetic and a dye is placed in the cornea, and a blue light is held against the eye to measure pressure. This test can diagnose ocular hypertension; a risk factor for open-angle glaucoma.

The doctor also measures corneal thickness, because it affects how the pressure inside the eye is interpreted.

Gonioscopy – this examines the area where the fluid drains out of the eye. It helps determine whether the angle between the cornea and the iris is open or blocked (closed).

Perimetry test – also known as a visual field test. It determines which area of the patient’s vision is missing. The patient is shown a sequence of light spots and asked to identify them. Some of the dots are located where the person’s peripheral vision is; the part of vision that is initially affected by glaucoma. If the patient cannot see those peripheral dots, it means that some vision damage has already occurred.

Optic nerve damage – the ophthalmologist (eye doctor) uses instruments to look at the back of the eye, which can reveal any slight changes which may also point towards glaucoma onset. 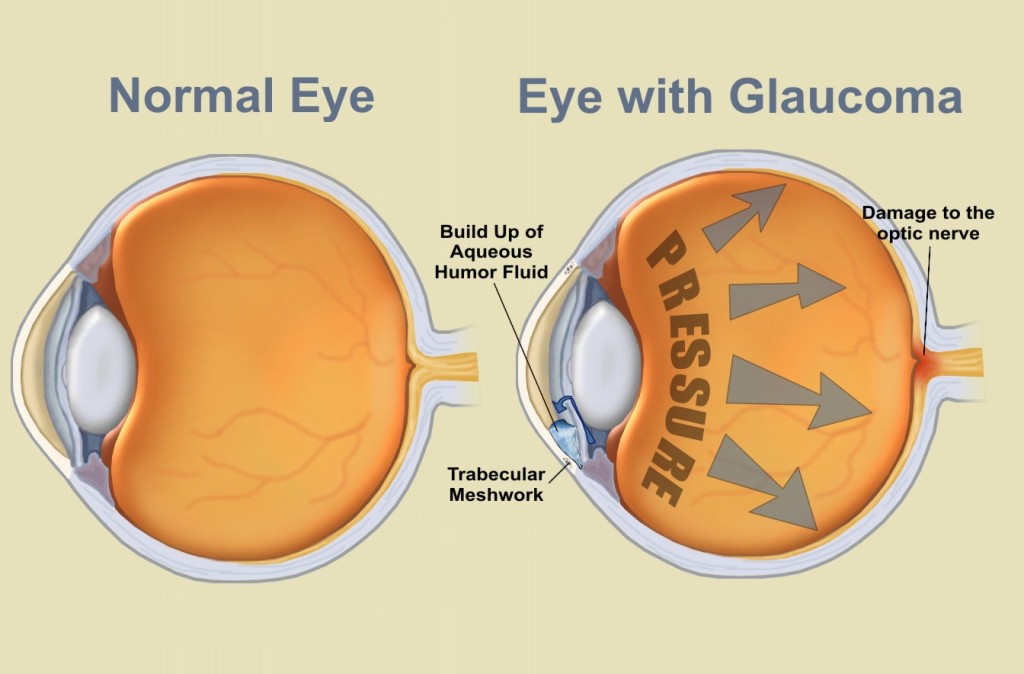 What are the treatment options for glaucoma?

Treatments involve either improving the flow of fluid inside the eye, reducing its production, and sometimes both. Damage caused by glaucoma is irreversible. Even the disease itself cannot be completely cured. However, regular check-ups and proper treatment can considerably slow down the progression of the disease, and even prevent further loss of eyesight.

• Eyedrops – in the majority of cases, initial treatment includes eyedrops. Compliance is vital for best results and to prevent undesirable side effects – this means following the doctor’s instructions carefully. Examples of eyedrops include:

• Prostaglandin analogues – these medications have prostaglandin-like compounds as their active ingredient. They increase the outflow of the fluid inside the eye. Some patients may experience reddening and stinging of the eyes, photophobia, some swelling around the rim of the eye, as well as darkening of the iris. The color of the eyelids may also change, and there may be blurred vision. Examples include Xalatan (latanoprost) and Lumigan (bimatroprost).

• Beta blockers – these medication reduce the amount of fluid the eye produces. Some patients may experience breathing problems, hair loss, fatigue, depression, memory loss, a drop in blood pressure, and/or impotence. Examples of such medications include timolol, betaxolol and metipranolol.Patients with certain lung conditions, such as emphysema or bronchitis may be prescribed a different medication. Diabetes patients who are taking insulin may also be prescribed an alternative drug.

• Carbonic anhydrase inhibitors – these also reduce fluid production in the eye. Side effects may include nausea, eye irritation, dry mouth, frequent urination, tingling in the fingers/toes, and a strange taste in the mouth. Examples include brinzolamide and dorzolamide.

• Cholinergic agents – also known as miotic agents. They help the fluids flow out of the eye. Side effects may include pain in and around the eye, myopia, blocked nose, some digestive problems, increased sweating and/or salivation, blurred vision, and ache around the eyebrows. Examples include pilocarpine and carbachol.

Sympathomimetic drugs – these reduce the production of fluid in the eye, as well as increasing their flow out of the eye. An example is dipivefrin, an epinephrine (adrenaline) compound. Some patients may experience painful and red eyes. Make sure your doctor knows if you suffer from heart disease or hypertension (high blood pressure).

If eyedrops are not effective enough, the doctor may prescribe an oral carbonic anhydrase inhibitor. Side effects are less if they are taken during meals. Initial side effects may include tingling in the fingers and toes and frequent urination – however, after a few days they usually resolve. Much less commonly, there is also a risk of rashes, kidney stones, stomachache, weight loss, impotence, fatigue, and a strange taste when consuming fizzy drinks.

• Surgery – if drugs don’t work, or if the patient cannot tolerate them, surgical intervention may become an option. The aim of surgery is usually to bring down the pressure inside the eye. Examples of surgery may include:

• Trabeculoplasty – a high-energy laser beam is used to unblock clogged drainage canals, making it easier for the fluid inside the eye to drain out. This procedure nearly always reduces inner eye pressure. However, the problem may come back.

• Filtering surgery (viscocanalostomy) – if nothing else works, including high-beam energy laser surgery, the patient may need a filtering procedure, usually a type of trabeculectomy. The surgeon creates an opening in the white of the eye and removes a small piece of the trabecular meshwork. This allows the eye fluid to leave through the opening.

• Drainage implant (aqueous shunt implant) – this option is sometimes used for children or those with secondary glaucoma. A small silicone tube is inserted into the eye to help it drain out fluids better.

• Acute angle-closure glaucoma – this condition is treated as a medical emergency. Pressure-reducing medications are administered immediately. A laser procedure is usually carried out which creates a tiny hole in the iris, allowing fluids to pass into the trabecular meshwork – this procedure is called an iridotomy. Even if only one eye is affected, the doctor may decide to treat both, because this type of glaucoma often affects the other eye too.

Glaucoma cure may lie in targeting ‘stiff cells’ that impede fluid drainage – A unique international study that is unusual because it points to a mechanical feature of cells as a cause of disease suggests glaucoma arises when certain cells in the eye become stiff and impede drainage of fluid, causing pressure to build up. Treatments that target this stiffness could lead to a cure for glaucoma, say the researchers.

Loss of eyesight is the most common complication. The earlier a patient is diagnosed with glaucoma, the better his/her outlook.